Picture Of My First Scarf 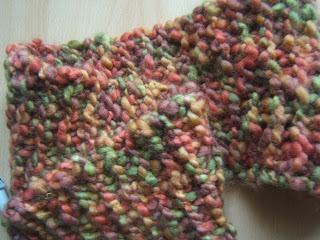 Well I found the batteries for the camera, and yes Callum did have them, he's terrible if you need a battery you know where to look, doesn't matter if i buy him a multipack he says you can never have enough batteries, grrrr kids lol

Anyway!! heres the pictures of the scarfs that I knitted. The first one, doesnt look very neat but its the wool , honest!! lol
It 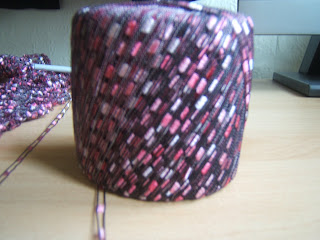 was not the best of wool to learnt to knit with as one minute its really thick, the next its thin. But after pulling it all out and starting again, loads of times( I lost count how many- so you can tell it was a lot) I got the hang of it, I just knitted this one, as when I was purling with it , it looked awful, as my plan was to knot a garter knit scraf, but with this wool , nope my best laid plan went astray yet again!!
This is what I am currently stitching, which at first it was really hard to get the hang of it, as i kept putting my needles inbetween the hole in the wool( if you can call it that), but now its coming along really quick ( well not so much now 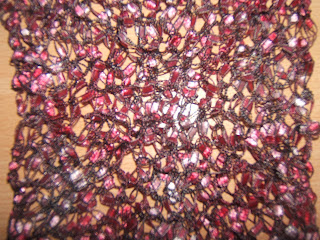 since i am getting ready for the hols)
I haven't got much wool left , so I have bought some plae pink and lilac wool and I am going to knit a cushion cover for Nicole's bed, and have a go at actually following a pattern!!
I have less than an hour to go before Ihave to set off for the dentict and I am now feeling ILL!!!
Roll on tonight when its all over!!
Posted by Bev at 7:12 am

Your scarves are very pretty ;)

Love your scarves Bev. My girls started knitting one each for last Winter. LOL! They're still not finished!