well not much to show really, on the HAED BB i joined another SAL, this time Light Of The World. and where some people are nearly finishing there second page, but life gets in the way here so i only managed about a 1000 stitches. 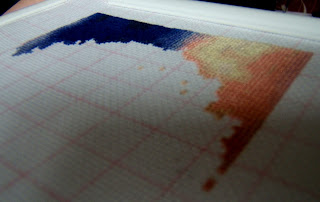 Also on my DOTF, that has been slow too only 500 stitches in that so not worth  showing that then, and then to top it off i have to start the baby sampler for my nieces christening, which she has now sprung on me will be happening sometime next month
Posted by Bev at 10:22 pm 3 comments: Links to this post

A Near Disaster Averted, for A Happy Dance

OK another finish, yes I didn't exactly stick to the chart as i thought it had enough on it and i didn't want to overdo it and yes it is a week late as my wedding anniversary was last monday but i did it, nearly had to throw it out as i scorched it when i was ironing it, I couldn't believe it the first time i scorch something ironing, and its it a crappy shirt that i wanted to throw out, no its the bleeding wedding sampler that took me nearly 18 months to complete, but after a tip from a friend i finally got it out. You can see it a bit but only from the back. 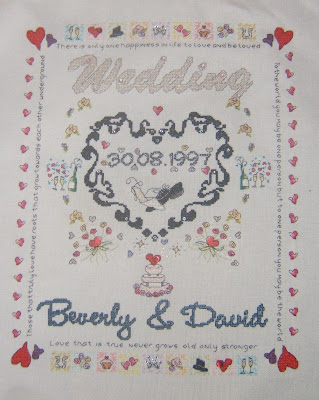 Now i really want to start HAED's Dreaming On The Farm but i have so much to do, but i think i should stitch what i want to at that moment, so with that i decided to actually sort out my threads, I had boxes filled with threads for different pieces but i didn't want to have to order more, so i sorted them all out yesterday while trying to watch Ugly Betty ( hubby kept turning it over to some war film that he had seen 20 times before- so there was a battle of wills in our house yesterday) 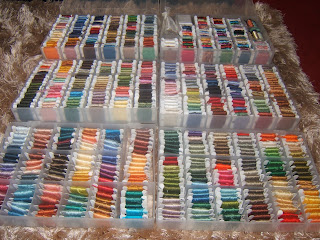 and i couldn't believe how many duplicates of threads i have i mean how many bobbins of one colour do i need?
So the good news is that i don't need any threads for DOTF, woop woop!
Posted by Bev at 10:32 am 3 comments: Links to this post