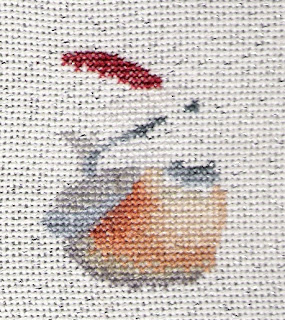 Well i have finally finished my Christmas Chickadee, after two attempts lol.


I started it Thursday night and by Sunday Morning this is how much I had done.


I was determined to finish it, so i didn't really move from the chair last night just sat and watched TV that I recorded on Sky+, and finished it, apart from the back stitching, last night.

I didn't want to go to work today and not finish it, so this morning I did the back stitching. It wasn't as bad as the Chorus line, as there was hardly any to do, which I was glad about as its not my favourite part. 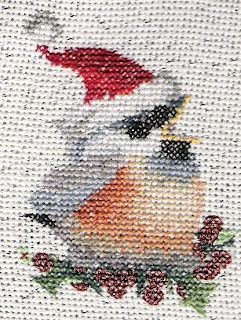 The finished result looks so much better than it does in the picture, as the silver fleck doesn't come off that well when i scanned it in, and the metallic red that i used for the berries, looks really dark too, but in real life it catches the light and looks really good. Thats the trouble with metallic it looks rubbish when on here
The trouble is now, do I send it on a Christmas card, or keep it for myself. I really love this design and about 95% of what i have stitched this year has been for other people, the trouble is I chose designs that I like to stitch and I would keep for myself most of the time, so where do you draw the line lol
I have just found out today that I have also got an interview for a job that I applied for, running my own school kitchen. I would still be working for the local council, but it would be a promotion .I would be doing it on my own but there are only 45 kids, and the pay is nearly double to what I am on now, so even though I love the job I do now, as it is really easy and I don't have to think about it. The money would come in so handy, especially with Christmas mas 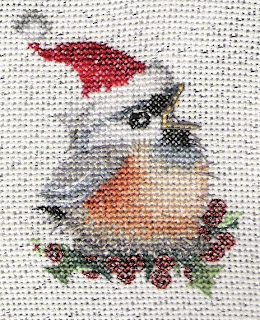 coming up.
Decisions, decisions, takes me all my time to decide whihc pattern to stitch next, never mind do i change my job or not!! lol
Posted by Bev at 3:06 pm 10 comments: Links to this post

I Have Finally Done One!!!

I have actually made a start on my Xmas cards and finished one ( cant count the Christmas chickadee that i started as i have lost i- well Hubby did!! Grrrrr MEN!! lol). I have been ringing around the local shops for some opalescent Aida, even though i know prefer to stitch on even weave, as i prefer the finished look, but so far have had no look. i don't really want to buy off the net as i have been having real problems with the post and it always take ages to arrive and i want to start as soon as possible. 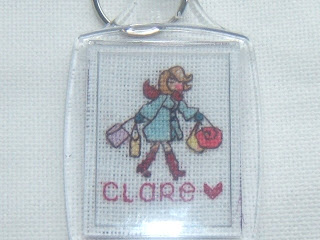 I have decieded just to stitch them all up and then make them into cards all at once,so hopefully by mid december I will have done enough for everyone( the neighbour next door who i dont like- she is really nasty to my kids as they dont like to play with her grandson, who swears constantly, bites and is just a bully( hes 6) she must be so proud- will make do with a crappy bauble card lol)
Anyway finished Santa last night so i am going to make a 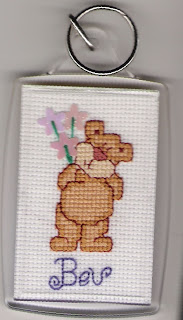 start on a snowman now, not going to stitch anything else( apart from any exchanges in the yahoo group) except Christmas cards. I love Christmas, the preparation, the shopping, wrapping, everything, it just always seems a let down when its over. The rest of the family (apart from the kids) aren't bothered about Christmas they all same they hate it, BA HUMBUG!! lol

I also got my Lizzie Kate exchange through today, again I have no idea who has sent it, but I know that i got my keyring from Clare, also posted a piccie of the one i sent her. I love the keyring I got from Clare as I am always losing my keys ( which since i have only 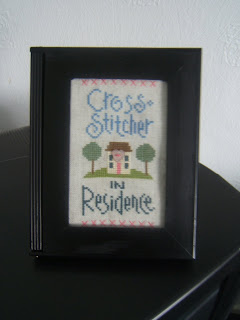 got 1 key for my car isn't that good) so i have put it on the only car key i have that way I hopefully shouldn't lose it quite as much!! 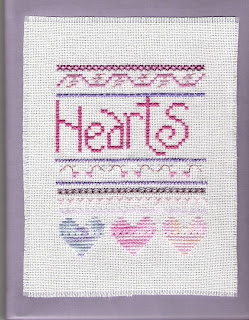 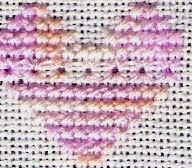 This is the design I chose for a Lizzie Kate style exchange. I chose this one from Heart in hand, called 'heart sampler'.
I changed the colours so it would match the occasions book I was putting it on, and used variegated threads for the larger hearts at the bottom of the design.

I have another exchange to do for a winter/xmas themed mousemat, which i signed up for on the cross-stitching forum. But I think after that I will just keep tot he exchanges on the yahoo group I am on, It seems that all I have stitched this year is for exchanges.

I went to hobbycraft to see if i could find anything nice to stitch, but I wasn't impressed with the selection they had. No coloured evenweave or aida, no aida bands that I wanted, nothing at all to do with Christmas.

I did get my CrossStitcher and World of Cross Stitching magazines today through the post so hopefully there will be something there to inspire me for xmas.
Posted by Bev at 8:12 am 2 comments: Links to this post

Email ThisBlogThis!Share to TwitterShare to FacebookShare to Pinterest
Labels: Exchange

Been Gone So Long 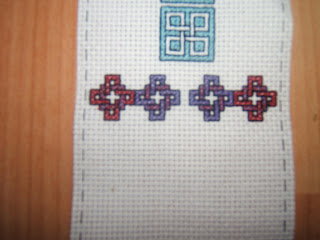 I cant believe where the time has gone, its been over a month since my last post and so much has happened, but I have hardly done any stitching.

What I have done i cant post yet as they are for exchanges but hopefully i can put them up by Saturday.
I did manage to finish off my bit of the RR that I was doing. there wasn't much room left so I put my design across blending two threads. 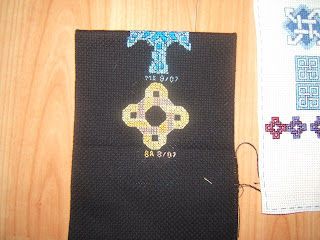 The other bookmark in the RR, I used variegated threads, for the outside of the design and ht inner part i blended pale blue and orange and it was really different. looks a lot better in real life, than it does in the picture.

The holiday was a disaster, it rained all the time I had my purse stolen, and since I had just come out of the building society with £700, the nice person who decided to take it, must have thought it was there holiday/Christmas rolled into one, anyway we made the best of what money we had but it doesn't go far, so we came home early, very fed up. ( especially since I left my sewing at home, and couldn't afford to buy a kit - in the end i started to read Lauren's Princess Diaries book, which I am now on the second one. How old am I ? lol)

On the way home our car broke down on the motorway so we were stood on the grass verge for 3 hours waiting to for AA to turn up, he had a fit when he saw us. He was told that a=it was man and a car, not car, caravan 3 kids and us, I mean I rang them 4 times to see where they were as they kept saying that they would be there in 30 minutes and each time i told them how many of us there was. we were just lucky that it wasn't raining.

When we got home, I had to take my car for its MOT to find out it failed, so old faithful ( which wasn't so bloody faithful after all since it failed on practically everything) was sent to the scrapyard, and i was without a car for a week, which to be honest felt like a longer than that ( we live in the middle of nowhere, 5 miles to the nearest shop and buses every two hours if were lucky and it cost me just short of £5 to get home on the bus, which took 40 minutes where i can 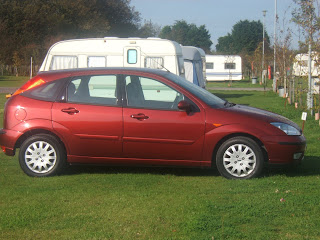 get home in 7, when i am in the car. Can you tell I don't like public transport?)

Anyway I treated myself, well my Dad did gave me a little bit too, he said since I take him shopping every week and to the hospital and doctors all the time, he would help me out and I am now the owner of my very first newish car ( its 4 years old but the newest one i have ever had since they have always been old wrecks).
I love it, and we went away to Skegness at the 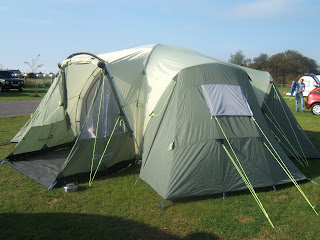 weekend in it to see what it was like on a run, so we bought a tent( I am now so skint you wouldn't believe it ), packed the boot full and went off camping, the kids loved it better than their main holidays and can't believe how much room there was in the tent, although I don't think I will be going to Skegness for a while, its not the same place that I remember.
So now I have a months worth of blogs to catch up on, so no sewing tonight again, although it might helpme as i am desperate for insipration as i have to get my stitching bug back!
Posted by Bev at 7:06 am 4 comments: Links to this post