Back from the Holiday and so much to do 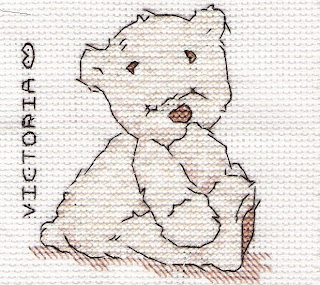 Well I have just come back from a weeks holiday and I have so much washing and ironing to do its unbelievable, How can you go through so many clothes in one week!!??!!
To make matters worse the bloody washing machine has broke down, so I am having to take my washing to my mum-in-laws, no big deal since i live next door to her ( yes I know what your thinking as i keep thinking it myself!! lol), but i have to do it in between her own washing and she has also been on holiday and i can only do it when there in, so at this rate i will get it all done by the end of next week!!

The holiday was great, crap weather, until it was time to come home, like it normally is, and we didn't really do anything, went to see the local tourist spots, went to to see Pirates of the Caribbean , At World End, swooned at Johnny Depp( which he looks so much better in the film than he does in real life), and did some stitching.

First I Stitched the Lickle Ted chart that you got free with The World Of Cross Stitching magazine, for my daughters friend. She has just come over here to live from Thailand so even though shes not having a party Nicole thought it would be nice to give her something. 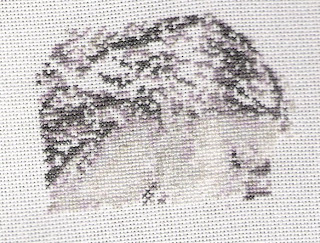 Then I started my motherhood QS, can just make out the womans face now, but unfortunately that will have to take a back seat for now since I have a Friendship card to make ( what the hell do i stitch for that?) and my sisters engagement card to do for this Friday, yes I know I left it a bit late, so hopefully I will get back on track with it by the end of next week ( ok probably not know i have said that lol)

God I hate coming back form holiday its just so hard work lol
Posted by Bev at 9:41 am

Glad you had a nice holiday, despite the weather. Your HAED looks great ;)

Lickle Ted is so cute!

Love the start you've made on your HAED. This is a gorgeous one.

Oh, Lickle is so cute and QS-Motherhood is looking great! Good luck with the laundry!! :)